Thomas was a notable accomplice of the infamous and notorious highwayman Richard (Dick) Turpin.

Dick Turpin was born in Hempstead, Essex, England and in his early life trained as a butcher. Later in his youth he joined up with robber Samuel Gregory and his gang of thieves "The Gregory Gang". The gang started out in 1731, stealing deer from the Waltham and Epping Forests and it is thought that as a butcher Dick Turpin was an obvious channel for disposal of the ill-gotten gain. 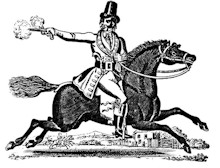 Thomas Rowden and Dick Turpin were regular participants in the activities of the Gregory Gang as they progressed to robbing houses from 1734 to 1735. A handful of the 15 or so, members of the gang were caught very early in 1735. When, later in 1735, Samuel Gregory and other members of the gang were caught the gang broke up although some remained at large. The surviving members, who seemed more shrewd in avoiding capture, included both Thomas Rowden and Dick Turpin. After operating as a highwayman for a few more years Dick Turpin was eventually caught and hanged in York, England in 1739.

Born circa 1706, Thomas Rowden was a little, stocky man. He had a round face marked with small pockholes and was, by trade, a pewterer. This understanding of metals seems to have led him to his early illegitimate trade, as in 1733 he was charged with counterfeiting ten half-crowns in the previous summer. On this occasion the Southwark court found him not guilty and he was acquitted.

In 1737 and after his break away from the Gregory gang he was once more caught on a charge of 'putting off bad money', basically counterfeiting. This time he was caught in Gloucester attempting to buy bread, and landed up in jail.