Thomas Rowden was one of the very first Englishmen to settle in Australia.

Born in 1758, Thomas grew up in the quiet Dorset village of Owermoigne

, barely a few miles from the south coast of England. His occupation is recorded as cordwainer, a maker of fine shoes, but before long, and maybe because he lived not far from the sea, he signed up as a Royal Marine at Plymouth.

At the culmination of the revolutionary war in the Americas in 1783, Britian needed to find somewhere new to transport her convicts. A few years later orders were issued in London to create a penal colony in New South Wales, Australia. In 1787 the first fleet of 11 ships sailed from England, arriving in Botany Bay on 19th January 1788. Thomas was a Royal Marine serving on 'Friendship', one of the 6 convict ships, which carried on board just over 100 convicts.

Find Thomas and his family in sept 25 pedigree chart.

Further information about the Fleet 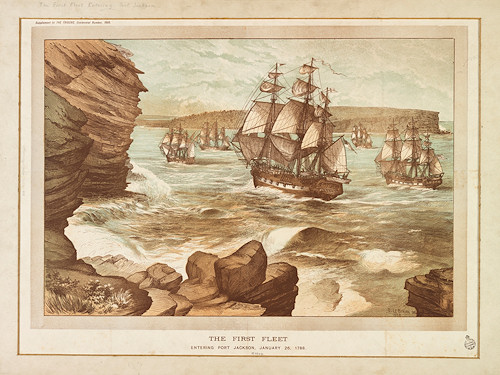